Virtually everyone knows that it’s hard to square the differences between the Genesis account of creation and what we now know through science. For centuries, people believed that the earth was less than 10,000 years old, because the Bible doesn’t seem to go back any further than that. Now, geology, biology, chemistry, anthropology, archaeology, and astronomy agree that the earth (and our universe) is far, far older than that. Now, it’s certainly possible that God spoke everything into existence 10,000 years ago, but with the appearance that it had been here for billions of years. That’s what I believed when I was a Christian. Others think that the “6 days” spoken of in Genesis is figurative for simply “periods of time.” But even if one of those theories could answer some of the problems, it can’t solve them all.

The average person living at the time Genesis was written did not know that the earth is a sphere, or that the sun is a star, or that the earth is just one of at least 8 planets circling the sun. Of course, if God miraculously inspired the writing of Genesis, then it doesn’t matter what people understood at the time it was written, because God knew everything we know now, and more. But that’s the thing: Genesis has more problems than just the age of the universe. When you read Genesis carefully, you get a view of the universe much like the one depicted by these images: 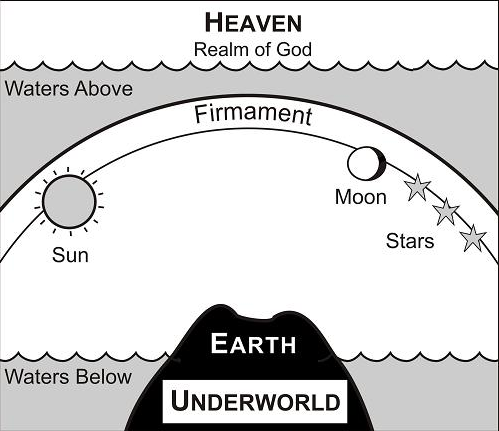 Let’s look at some passages, and I think you’ll see the similarities. Take Genesis 1:6,7, for instance:

What? This is probably one of the most confusing passages in this chapter if you’re trying to apply it to what we know of the cosmos. What does it mean to separate the waters from the waters? And what’s this “expanse” that it talks about? Well, verse 8 answers that for us:

And God called the expanse Heaven.

In other words, the expanse is the sky. It’s not “Heaven” in the spiritual sense, as we’ll see from some of the other verses. But how does the sky separate waters? We learn more starting with verse 9:

So the waters under the expanse (sky) are oceans, rivers, etc. What are the waters above the sky? We can’t say it’s water vapor for two reasons: One, it doesn’t make sense in the context of the passage. But the second and more important reason is explained here (vs 14-18):

According to this passage, the sun, moon, and stars are stuck in the sky — the same sky that keeps back the “waters above.”

Now look again at the two images I posted above. Genesis is describing a system in which the sky acts as a dome around the earth. This dome has pretty lights stuck in it to help us see, even when it’s night. The business about water being above the sky makes sense when you think about it — why else is the sky blue? And where do you think rain comes from? We see this in Genesis 7:11-12, when God decides to flood the earth:

In the six hundredth year of Noah’s life, in the second month, on the seventeenth day of the month, on that day all the fountains of the great deep burst forth, and the windows of the heavens were opened. And rain fell upon the earth forty days and forty nights.

For people living at the time Genesis was written, this was not a bad job of explaining things. It explained why the sky was blue, where rain came from, and why we have the sun, moon, and stars. We can easily understand why they held these beliefs. However, in today’s age, the Genesis account is absurd. Efforts to make it fit with what we now know about the universe is a bit like trying to rationally argue for the existence of Santa Claus. Why not just put an end to all the mental gymnastics and accept that like every other religious text in the world, the Bible is just the product of mankind’s imagination? It may be a difficult proposition to accept, if you’re a firm believer. But I can tell you from experience that the whole thing makes a lot more sense when you stop assuming God had anything to do with the Bible.

View all posts by Nate

264 thoughts on “How Genesis Views Our Universe”